Our journey started last September when Design News and UBM Canon announced that they were accepting applications for this year’s Golden Mousetrap North American Design + Manufacturing Awards. The Golden Mousetrap Awards celebrate the success of the people, companies, and technologies that are driving progress in today’s design and manufacturing industries. With encouragement from the team, we nominated solidThinking Inspire® for the Design Tools: CAD/PDM/PLM Golden Mousetrap Award.

Fast-forward to this January. Design News announced that, from their largest application pool to date, the Advisory Board and content team had selected 57 different products in 16 different categories as finalists for the 2014 Golden Mousetrap Awards. These 57 finalists included three in the Design Tools CAD/PDM/PLM category, with solidThinking Inspire among them. The team couldn’t have been more excited to hear the news. That day we booked our flights to Orange County to attend the prestigious awards show, held during the Pacific Design and Manufacturing conference.

Arriving in California at John Wayne airport was a bit surreal. You may have heard by now that we are experiencing record snowfalls in Michigan this year. Landing in California was the first time I had actually seen grass in some time. Enough about the weather, it was great!

The next morning we woke up early to attend Pacific Design and Manufacturing at the Anaheim Convention Center. This was a very large exposition to say the least. Walking the aisles we saw a huge range of different products, from large manufacturing line robots, to every kind of tiny medical device you can imagine.

The Golden Mousetrap awards ceremony was fast approaching so we made the short walk over to the Anaheim Marriot where it was to take place.

Design News had organized an extremely elegant reception with around 300 attendees and standing room only. Fortunately for us, there was a section up front reserved for visitors from “finalist” companies.

In addition to conferring the Mousetrap awards, Design News recognized two other individuals for their contributions to the engineering world. The Rising Engineer of the Year Award went to Justine Haupt, who is working at the Brookhaven National Laboratory to design test systems for the Large Synoptic Survey Telescope. The latter is said to be the world’s largest digital camera. The Lifetime Achievement Award went to National Instruments’ founder, Dr. James Truchard.

The best comment of the night occurred when one of the speakers noted how ironic it was that they were giving out mousetrap awards within earshot of Mickey Mouse’s home, Disneyland!

Design News partnered with Stratasys to 3D print the actual Mousetrap awards. Prior to handing them out, a minute-long video was shown illustrating the process of designing and manufacturing the awards.

When the time came to start distributing the awards, we sat patiently and waited while many other worthy companies were honored. After a number of them had been announced, the time had come for the Design Tools: CAD/PDM/PLM category announcement. The presenters listed off all of the finalists and to our delight, solidThinking Inspire 9.5 was chosen as the 2014 winner of the Golden Mousetrap Award.

The entire experience was rewarding. We were thrilled to be named a finalist, let alone the winner. Receiving this recognition from leading organization Design News is a testament to the hard work the solidThinking team has invested to create such a revolutionary product.

In closing, I wanted to congratulate all of the other finalists and winners, and thank Design News and UBM Canon for the opportunity to be recognized at the event. Winning this prestigious award is a huge honor for us, but we won’t stop here. We are confident that upcoming releases of solidThinking Inspire will continue to surprise and delight our current and future users, all the while helping them to design products lighter, faster, and smarter. 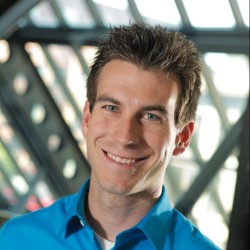