As with humans, the eccentricity can be a serious default for electrical rotating machines. Indeed it can degrade its performances, causes other defects and make it more audible (noise and vibration). This is why it is important to diagnose it as early as possible, to study it and its effects on the machines.

In the literature we can find many approaches to make a diagnosis, however, the one that interests us the most is signal approach. This one is based on measurable signals data, such as the current, torque, stray flux, noise and vibrations, and temperature. The principle of this method is to look for frequencies unique to the healthy or fault operation. The idea is to extract the magnetic signature of the machine in its healthy and degraded mode. So we can spot specific frequencies of typical defaults. The contribution of Flux® in this approach is double. In one side, we can combine several faults and know their magnetic signatures, and in other side we can know the performance of the machine in the degraded mode.

In this article of CEDRAT News – N°67 we are interested in the static and dynamic eccentricities fault in the induction motor. The quantities that we have considered are: torque, leakage flux and magnetic forces measured on the exterior of the machine (typically like accelerometer sensor). For each quantity we compared its signature in the degraded mode against the healthy mode. We devoted a small paragraph of this article to show the new feature of Flux® concerning the double FFT.

Thanks to the possibilities offered by mechanical sets in Flux®, we have been able to model eccentricities and study their magnetic signature, and of course evaluate the performances of the machine with the presence of the defaults. From this small study, we noted that there are harmonics due to eccentricity default that we find in all the measured quantities; these harmonics are temporal harmonics H19, H21 and H23. We concluded also, that it is better to monitor the eccentricity default by measuring magnetic forces and/or electromagnetic torque, because the influence of this degraded mode is more visible on these quantities. 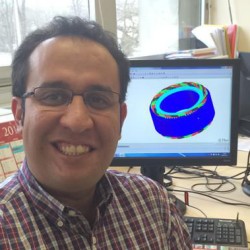