Pokémon fever! You may have heard stories of people hunting down Pokémon 🙂
The games took the world by storm in the late 1990s. The original handheld games, Pokémon Red and Blue, came out in 1998, followed by Yellow in 1999 and Gold and Silver in 2000. Everybody wanted a Pikachu.
Few days ago, a new Pokémon game has been released and everyone is suddenly catching Pokémon fever again! By using a phone’s ability to track the time and any location, Pokémon Go imitates what it would be like if Pokémon really were roaming around you at all times, ready to be caught and collected.

In this project, I evaluated the electric field generated by a Pikachu. In order to simulate such a complete shape, I imported and meshed this model in SimLab. I used a refinement box around Pikachu to ensure good results close to the geometry.

Then I imported this mesh with a Nastran format in Flux to perform electrostatic computations. I assigned 0 V on the surrounding box and 10 kV to the Pikachu. In the post processing context, I plotted different views of the electric field obtained including arrows of E, isovalues on a cut plane, paths along field lines coming out of the ears, the tail and the red cheeks.

Look at those results and in the future be careful when you encounter a wild Pikachu! 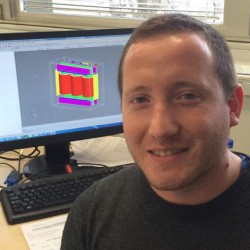